Institute fellow Joshua Petimar’s new study in The BMJ finds that calorie labeling in a fast-food restaurant franchise resulted in small initial decreases in calorie purchases, but this was reduced over time. The study, Estimating the effect of calorie menu labeling on calories purchased in a large restaurant franchise in the southern United States: quasi-experimental study, is online now. Institute co-authors include Fang Zhang, Lauren Cleveland, Denise Simon, and Jason Block as senior author.

We talked to Dr. Petimar to find out more. 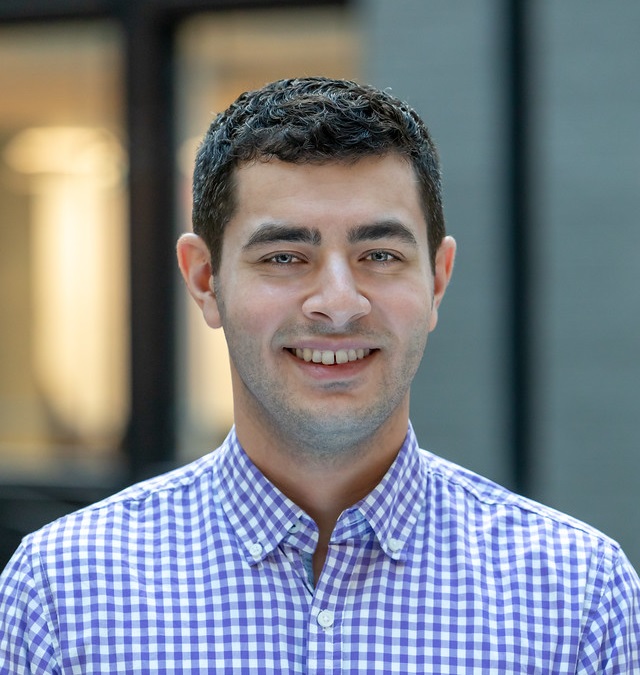 Q: Thanks for talking to us about your new study - let’s start with some background information. Can you tell us about the implementation of the menu labeling provision within the Affordable Care Act and the intention behind it?

A: When the Affordable Care Act passed in 2010, it included a provision that required food establishments with 20 or more locations in the US to label their menus with the calorie content of prepared foods. At this time, several cities and states had already implemented their own calorie labeling laws or had passed legislation to require calorie labeling. The intention of these laws was to make the public more aware of the calorie content of prepared foods sold in chain food establishments, with the ultimate goal of encouraging purchases of lower-calorie items and improving diet quality. One of the objectives of the ACA provision, in particular, was to establish a uniform requirement across the country. While the ACA was passed in 2010, implementation of the calorie labeling provision was delayed several times and was not ultimately implemented until May 2018.

Q: It’s interesting there was such a long delay in implementation. Expanding on that, can you tell us more about the motivation behind conducting this study?

A: The motivation of this study was to use large amounts of sales data from a fast-food franchise to examine whether calorie labeling was associated with changes in calories purchased. Most previous studies on calorie labeling have been done either in laboratory settings (i.e. not actual restaurants) or have collected receipts from individual participants. In both cases, studies often do not have large enough samples to detect small but potentially meaningful associations of labeling with calorie purchases. They also are often not generalizable to all fast-food customers. By using sales data, we had a much greater ability to detect any small association that existed and included all customers of the franchise over the study period.

Q: Can you provide an overview of how you conducted the study and what the findings showed?

A: The franchise, which included 139 restaurants across 3 separate chains, provided us with the number of each item that was sold in every restaurant on a weekly basis. They provided us with their sales data from April 2015 until April 2018, and they labeled all of their menus with calorie information in April 2017. Their menus stayed labeled over the course of the study. We assigned nutrition information to the items using Menustat, which is a database maintained by the NYC Department of Health and Mental Hygiene that includes nutrition information for items sold in the top 100 US restaurant chains. We then calculated the mean calories purchased per transaction in each restaurant for every week of the study. We used an analytic approach called interrupted time series to examine how calories per transaction changed after labeling compared to the pre-labeling trend. We examined total calories purchased, by item type (entrees, sides, and sugar-sweetened beverages) and by the racial/ethnic composition and median income of restaurant census tracts. 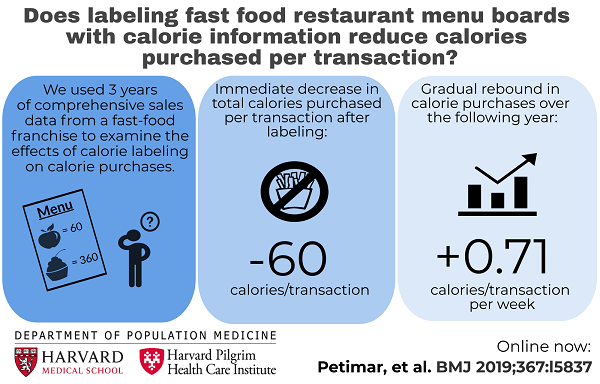 We found that calorie labeling was associated with an immediate 60-calorie/transaction decrease (about 4%). However, we also noted an increasing weekly trend in calories/transaction over the year following labeling. This means that calorie purchases decreased slightly after labeling, but then partially rebounded by the time our study ended one year later. We saw the largest decline in calories purchased from sides (which also included desserts). We also observed that the post-implementation trend increase (i.e. the calorie "rebound") was stronger in lower-income census tracts than in higher-income census tracts, meaning that the initial drop in calories/transaction diminished faster in lower-income areas than in higher-income areas.

Q:  Did the results surprise you?

A: We were not surprised that the initial decrease in calories/transaction after labeling was small - up until now, most studies have only had enough statistical power to detect large differences in calories purchased, and most did not observe any such difference. So we had a sense that any association of labeling was likely to be small and only easily detected with a very large study such as ours. We were also not very surprised that calorie purchases gradually increased after the initial drop, since we hypothesized that some people might only respond to labeling in the short-term. Also, the franchise did not appear to reformulate their items to make them lower-calorie, which is one method by which labeling could reduce long-term calorie purchases in these settings.

Q:  How does this study differ from other studies of its kind?

A: In addition to our study being much larger and using objective measures of calorie purchases, our study was conducted in three states in the South - Louisiana, Texas, and Mississippi. We believe this is the first study to examine calorie labeling in this geographic area, which is significant because it is also an area with one of the highest rates of obesity in the US. We also collected data over a longer period of time (3 years) than most other studies, which allowed us to control for baseline trends easier and which may have enhanced the robustness of our findings.

Q: What are the implications of this study for calorie labeling and future research in this area?

A: Our study implies that calorie labeling may be an effective policy for short-term reductions in calorie purchases, but it's unclear whether these reductions can be sustained in the long-term. More data with longer follow-up will be necessary before we can know this for sure, and we plan to repeat our analyses in the future with an additional year of post-implementation data. This will be particularly important because our current study ended one month before labeling went into effect nationwide, and it's possible that the restaurants will reformulate more of their items and offer more lower-calorie items after this nationwide implementation. More research is also needed to examine calorie labeling in sit-down restaurants and supermarkets, where prepared foods are required to be labeled as well. Few studies have been done in these settings, but the effects of labeling could differ from what we have observed in fast food restaurants. Our group is currently working on a project to examine labeling in a large supermarket chain, so we hope to provide some additional insights on the effect of this law soon.

Estimating the effect of calorie menu labeling on calories purchased in a large restaurant franchise in the southern United States: quasi-experimental study, is online now on The BMJ website.